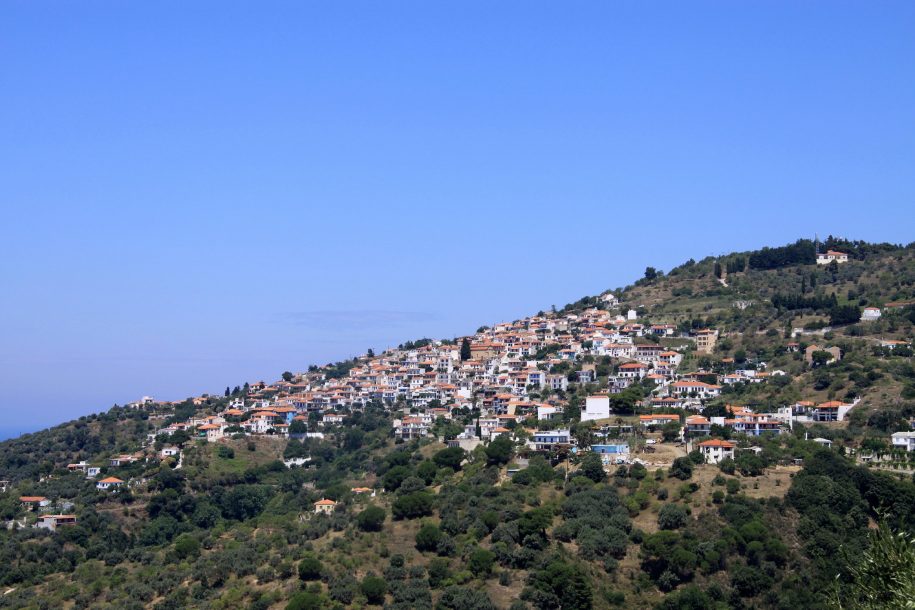 THE VILLAGE OF GLOSSA. Glossa is the second largest settlement on Skopelos. It is on the NW part of the island and it is built on the hill above the port of Loutraki with a wonderful view. It is the “high village” mentioned by Alexandros Papadiamantis in his narrative “Nostalgos”, “h ampelofyths periochi”, according to Alexandros Moraitidis. It is 32 km from the town of Skopelos and has a population of 1195 (2001 inventory).

Many have tried to explain the etymology of its name. Others attribute it to the tongue (Glossa) shape of the cape in the sea area of the settlement and others connect it to Knossa, the town made in this area by the first residents of the island, the Minoans. There is also a more humorous version for the name of Gloss,a as according to its residents, “by the time you have climbed all the steps in the village, your tongue reaches the floor”

Glossa –and the wider area around- is rich in springs and has many olive trees, plum trees and almond trees. Its houses, with Macedonian influences, are two-storey with tile roofs and wooden balconies, whose front part is covered with iron railings.

In its alleys full of step, one will come across women with local clothes, “foustanes”, and the residents maintain their traditional way of living, their customs and local dialect.

The settlement seems to have existed since ancient times and it may have been a “colony” of Cretans of the Minoan years, as traces of pre-historic housing were discovered.

The surrounding area, so much Glossa as Loutraki, presents great archaeological interest, since in many parts there are ancient towers, analemmas and buildings of various eras of the past.

At “Platonas” north of Glossa, at the monastery of Agios Taxiarchis, there are buildings in the forecourt of a paleo-christianic temple (single-roof basilica with a dome, built in 672 AD). This is the oldest temple on Skopelos.

A first source reference to the village is in a Patriarchal Letter at the end of the 17th c., which mentions the Monastery of Taxiarches. One other testimony from the end of the 18th c. Is that of Dimitrieis, according to which the village had 50-60 houses, while a third one, from around the beginning of the 19th c. mentions that Glossa and its “machalades” (neighbourhoods), that is the village Klima and the Lower Machalas, today Atheato, were administratively dependent on the Chora of Skopelos, to the point that the area was understood to be a “machalas of Skopelos”.

Later, in 1825, Glossa acquires its own administration, while from 1828 onwards it has its own Elders Authority. Finally, in 1835 it became a Municipality, with Alexandris Sideris as its first mayor.

What is particularly important is that in the years of the Revolution many foreigners from Thessaly, Macedonia, Evoia and Chalkidiki moved to the village. It is then that we must seek the modulation of many customs and naturally, all the loans that the folk culture of the area accepted.

Among those that moved to Glossa as foreigners was Kon. Doumpiotis, known as “king”, as he ruled in the village with his soldiers and controlled things. At the same time, he made pirate assaults.

One important element of the more modern history of the village is the effort to abolish the act of dowry, which was named “law”, whose roots must be sought at the beginning of the 19th c., when there was a plaint risen with the Ecumenical Patriarchy, which in turn decided to abolish the custom. This of course did not happen.

Residents of Glossa were mostly vine growers, with a production of a lot of good wine. Some, however, were sailors and ship owners. In Loutraki, there was an organized shipyard, but not of the same luminance as the one in Chora.

The history of the Monastery of Taxiarches has been identified with modern history of Glossa. This was offered as a dependency to the Athos Monastery of Xeropotamos, as the financial life of the village was directly affected by the respective financial strength of the Monastery. This all took place up to the beginning of the 20th c., when with the assent of the Monastery the land was sold to private owners. Educationally, things in Glossa became fruitful with the introduction of schools by the Exec. Commissioner in 1828-29.

What Glossa also has to show in the field of culture is the existence of icon workshops, which, according to sources, operated from the end of the 18th c. to the beginning of the 20th.

Continuing with ecclesiastical life of the village, it is worth mentioning that the parish church of Koimissi, overlooking the centre of the village, was built at the end of the 18th c., while it was renovated in 1867-68. Older temples are the Kathisma of Ag. Apostoloi, the temple of Profitis Ilias, Ag, Nikolaos in Loutraki and of course Ai Giannis in Kastri, with its hermitage and its traditions that draw their origins from neighbouring Athos.

The Local Department of Glossa (ex-community of Glossa) includes the village of Glossa, the village Atheato (or Machalas) and the settlement of Loutraki. According to the latest inventory, its population is 1.195.